Ok so back in Fiji and continuing on from last week’s recap of Epi’s fabulous Lovoni tour said Epi then told us the story of the village which is thus. When settlers came they presented various gifts to the Chief of Bau one of which was whisky, which he later got hooked on. In exchange for these gifts he would tell the settlers they could go to whatever island they wanted to not knowing or caring whether it was safe for them. Note Fijians used to be cannibals. Therein followed a big war between Lovoni and Bau. The former because of its location on top of a mountain point would roll down big boulders crushing the tribes and clans in its path thereby winning the battle. Later a missionary came into town and got the tribes together to try and resolve matters. Unbeknown to the missionary this was a bad move as the inhabitants of Bau proceeded to get the tribe from Lovoni drunk at the meetup party and aside from a few lucky escapees they were then captured and subsequently sold by the Chief of Bau. This raised over £5,000 – a vast amount of money in the 1800’s. Despite this the Chief later had vast debts to which his solution was to approach the British and propose that if they took on the debts then they could have Fiji and its inhabitants under sovereignty for 100 years. A few years later Queen Victoria discovered what had happened to the people of Lovoni and instructed the Governor that the people must be returned to their land as soon as possible. The Governor was adamant and said that they couldn’t just be returned like that they would have to be bought back. Her response was what would happen if we did nothing? Years from now people would be sueing for their grandfather and family members and who would pay all the money out? Some people did go back and some stayed settled where they were. Those that returned back to Lovoni found the twenty or so escapees hiding in the hill.

Enlightened on Lovoni we then headed off on our hike with Epi pointing out a variety of plants and trees together with their herbal uses. By this time the light was fading fast but we arrived at the top of the hill and looked down at the village nestled in crater below. I must add that I was well impressed with Val – 78yrs and concluded that she must have been a mountain goat in her previous life. By the time we got back to the hotel and exit the open sided bus Val looks like Bridget Jones after she has been in the open topped sports car. 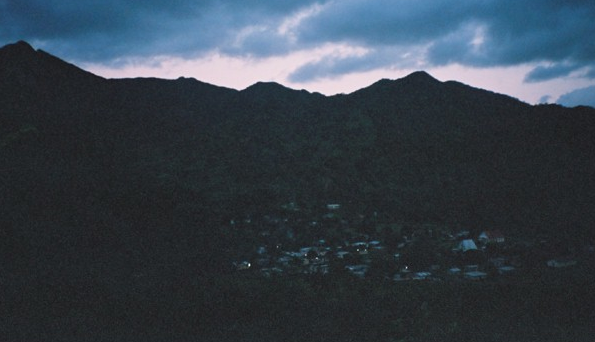 Despite the bus leaving at 04:30hrs it was like rush hour. I had decided to arrange a whizz trip to the Yasawa Islands. Jammy Buts – that’ll be me by the way in case you don’t understand my slang –  did strike again because when I visited the Air Fiji office I was told that there happened to be (at that time a very rare) flight going from Levuka straight to Nadi- only taking 45 mins and cutting out the 4hr bus journey from Suva/Nadi. This also meant I could connect with the Yasawa Flyer boat and stay for two night on one of the islands. With a spring in my step my imagination already had me prostrate on one of those stunning sandy beaches. Said day dream came to an abrupt end when I received a message the same day advising that due to engine problems the flight had been cancelled. Disappointed but ever resourceful I decided on my plan B.  A good hotel in Nadi for the night and a one night whizz trip to the Yasawas. Accommodation that night was the Tanoa International where I indulged in a 30min back massage, lazing on a huge bed, ordering room service and swanning about in the bath. Oh my goodness a bath, the luxury of a bath.

Next morning the journey to the Yasawa Islands began. 20min or so to Denarua Marina where I exchanged my vouchers and jumped onboard the Awesome Adventures big catamaran ferry. Awesome Adventures offer a variety of island packages and a great water taxi superb in itself as I lazed on the front deck whilst we travelled through the crystal clear all shades of blue waters doing various drop offs that covered ten different islands. By dropoffs, I actually mean that various island accommodation boats came out to our vessel to pick up their passengers. 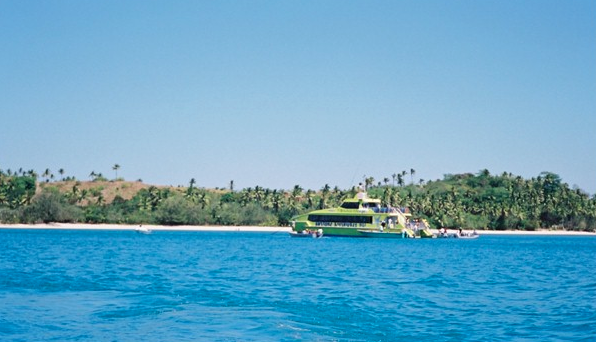 My island choice is a 4hr journey away and brilliant as I get to see – albeit from a distance – each island starting with the tiny South Sea to the last island Nacula. On recommendation of Val and Jane, I am staying on Tavewa and at David’s Place. Once there, despite having made my reservation and subsequent change of nights with David’s Travel – oh and despite the visitors book showing bods that had stayed for one night am told that they stayed for two nights really and they do not take bookings for one night and I therefore cannot stay.

Flabbergasted I wander a bit further down the beach where fortunately I discovered that three other places on the island were offering accommodation. Decide on Otto and Fanny’s because quite a few bods from the boat had gone there. Phew Fanny kind to me and my accommodation is a bure. As a German guy – Uwe (pronounced Oover) had also had his original accommodation not honoured we shared the cost. The bure, alas, wasn’t one of the traditional wood and straw thatched huts but rather a concrete version but I would have been grateful for a hammock. Talking of which it was 2hrs after arriving on the island and having my cake washed down with beer (we are back to spot the english bird) before I managed to throw myself into one with my very large book. Bliss. Despite fighting off a few hungry mosquitos. Blessed also once more on this occasion with a great bunch of people with a mix of nationalities which included German, French, Americans, South Africans and Aussies. Robyn and Peter, the American couple had organised a boat trip to one of the other islands to visit a village there. They had been invited back and wanted to know if we would like to come along and contribute towards the trip. 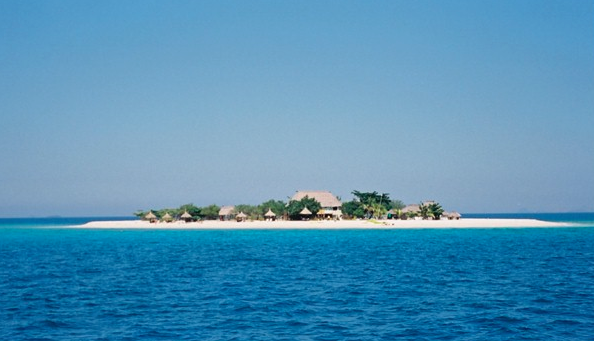 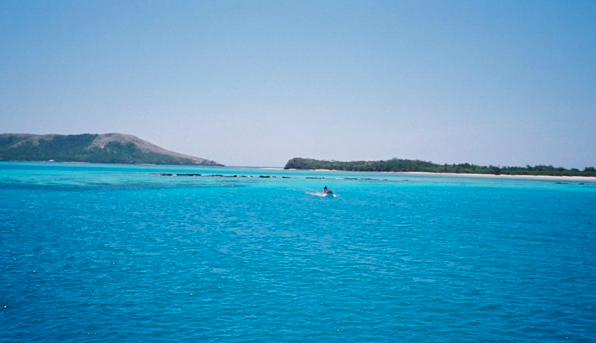 So the next morning saw twelve or so of us set off. Having received our instructions regarding the etiquette of wearing sunglasses and hats on the journey across the water to the village, I tried not to laugh as one of the villagers came over wearing his oversize sunglasses whilst another walked towards as with his Nike shorts clearly visible under his grass skirt.

A dance ceremony was to be performed for us and it was brilliant, absolutely brilliant. We were all given leis and pulled up to join in. One felt like the Fijian version of the conga – la, la, la, la, la, LA de la, la, la, la, la, la, LAAAA – ok ok not the same music. One of the guys was great, so happy and totally alive and vibrant when he was dancing. Small children at the side joined in as they clapped and nodded to the rhythm. No sooner had the last note been sung then the ladies rushed out to set up the shell market which we duly browsed and purchased from. Back on board the boat we just had time for lunch before the lovely Fanny waved us off. One night was so not enough but I was fortunate to have fitted so much in and the village trip really was wonderful as were my fellow free spirited travellers from across the nations. 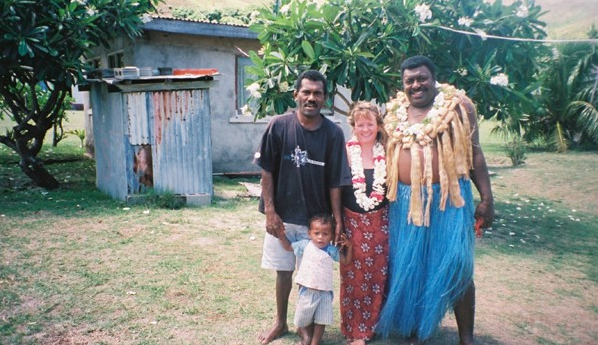 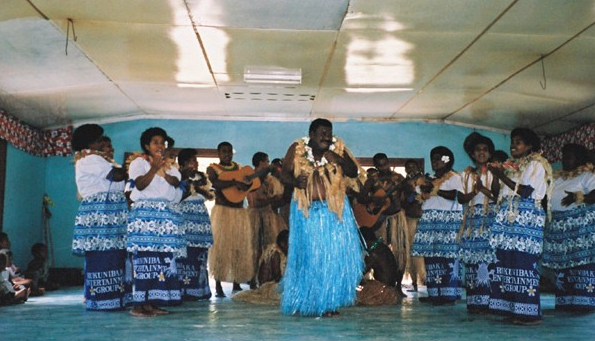 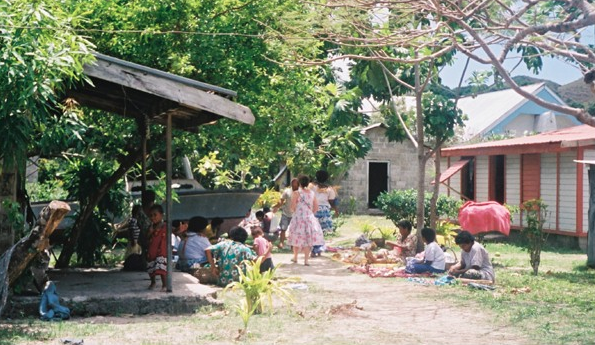 So farewell Yasawa Islands and join me next week when I tell you about my visit to Honolulu.

This site uses Akismet to reduce spam. Learn how your comment data is processed.